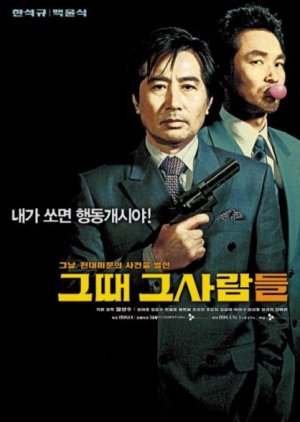 Other name: 그때 그사람들 , 그때 그 사람들 , Geudttae Geusaramdeul , Geuddae geusaramdeul
Description
October, 1979, Seoul... A private dinner party for the President and his three closest confidants — his Chief Bodyguard, his Chief Secretary, and the Director of the Korean CIA ... A struggle between the three for the President’s influence... When the night’s female entertainment arrives — the pop singer of the moment and a budding starlet — the KCIA Director leaves the room and announces to his stunned agents that he’s going to shoot their President... 24 hours that shocked and changed South Korea forever is brought to the screen by Director Im Sang-Soo in "The President's Last Bang".
Country: Korean
Status: Completed
Released: 2005
Genre: Comedy, Drama, Mystery, Thriller,