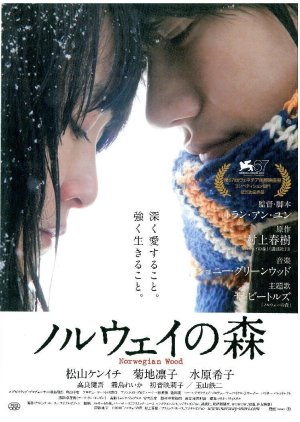 Other name: ノルウェイの森 , Noruwei no mori , Norway no Mori
Description
Set in the 1960's, high school student Watanabe Toru loses his only friend Kizuki after he commits suicide. Toru, now looking for a new life, enters a university in Tokyo. By chance, Toru meets Kizuki's ex-girlfriend Naoko in the university. They grow close because they both share the same loss. As Toru and Naoko grow even closer, Naoko's sense of loss also grows. After Naoko's 20th birthday, she leaves for a sanitarium in Kyoto. Toru, devastated by the situation, meets pure-hearted Midori during the spring semester. Midori looks like a small animal that just came into the world.
Country: Japanese
Status: Completed
Released: 2010
Genre: Drama, life, Psychological, Romance,