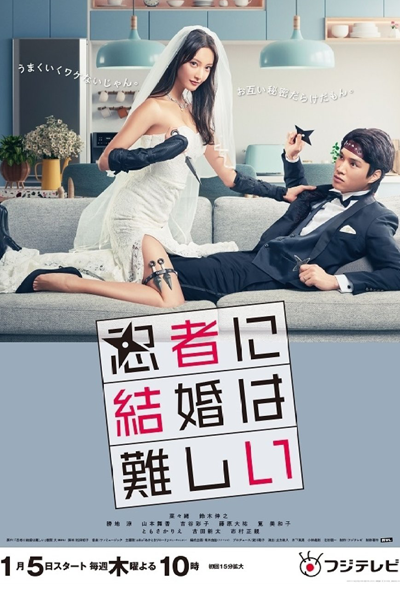 Other name: 忍者に結婚は難しい にんじゃにけっこんはむずかしい Marriage Is Difficult for a Ninja
Description

Kusakari Hotaru is married to Kusakari Goro and she works as a pharmacist. She holds a secret that she is really a ninja and part of Koka Ninja’s family. Her husband holds a routine job as a postal delivery man, but he has a secret as well. He is also a ninja and pat of Iga Ninja’s family. Even though Kusakari Hotaru and Kusakari Goro are a married couple, they are unaware their partner is a ninja. For generations, the Koka Ninja and Iga Ninja families have been rivals and quite hostile to each other. While Kusakari Hotaru and Kusakari Goro married because of love and their marriage life started off well, their relationship has deteriorated over things like home chores and using the bathroom. An assassination then takes place. Will Kusakari Hotaru and Kusakari Goro choose their marriage or their family affiliation?
Adapted from the novel "Ninja ni Kekkon wa Muzukashii" (忍者に結婚は難しい) by Yokozeki Dai (横関大).
Original Network: Fuji TV,
Director: Hijikata Masato [土方政人]
Country: Japanese
Status: Ongoing
Released: 2023
Genre: Action, Comedy, Hidden Identity, Romance, Thriller,