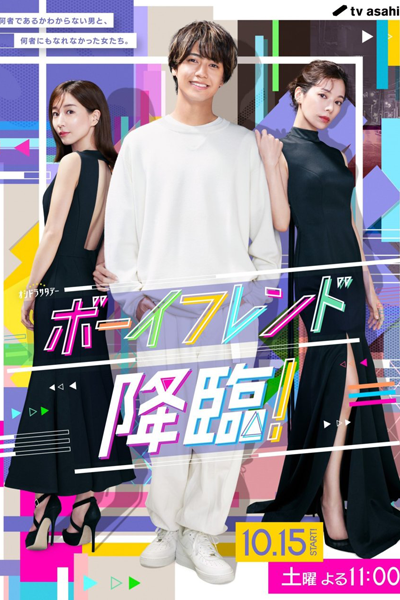 Other name: ボーイフレンド降臨！ Boifurendo Kourin! Boifurendo Korin! Boyfriend Korin! Boyfriend Advent! Boyfriend Descends!
Description
Asahi is a 23-year-old boy who attracts everyone around him with his innocent smile, words and talent. Chatani Kashiko is a 35-year-old working for a small advertising agency and is someone who has low self-esteem. Meanwhile, Sato Wataru is an expressive woman and works as a backstage actress in a small theatre company run by her boyfriend, who sometimes uses her as a ghostwriter. Kashiko and Wataru used to be best friends in high school and unexpectedly reunite through Asahi.
Original Network: TV Asahi,
Director: Nakamae Yuji [中前勇児] and Shinjo Takehiko [新城毅彦]
Country: Japanese
Status: Ongoing
Released: 2022
Genre: Accident, Amnesia, Comedy, Drama, Miniseries, Romance,