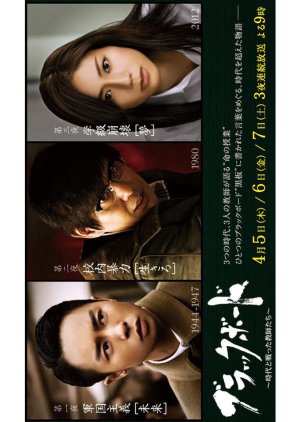 Other name: ブラックボード〜時代と戦った教師たち〜 , Blackboard ~Jidai to Tatakatta Kyōshi tachi~! , Burakkubōdo ~Jidai to Tatakatta Kyōshi tachi~!
Description
A drama special about 3 different stories. The first is set in 1947. The second in 1980. And The third in 2011. In 2011, the junior high school in Ota Ward experiences a complete breakdown in classroom discipline. Takizawa Momoko, an English teacher in charge of the third-year students, writes the words “My dream” on the blackboard, but it is in vain for no one participates in the lesson. Even so, Momoko perseveres in reaching out to her students. Yokote Ryoko, the present school principal who was once colleagues with Goto Akira, is supportive of her. One day, Momoko learns that Omiya Masaki, an extremely defiant transfer student, has not received adequate education because of his family situation, and gives him personal coaching, but she is criticized for forming an inappropriate relationship with a student. How does she talk about “love”, “dreams” and the “meaning of school”?
Country: Japanese
Status: Completed
Released: 2012
Genre: Drama, Historical, Youth,